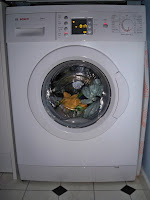 It's inevitable that at the end of the day, their precious items have a 'bath' in the frontloading washing machine. George's Sharkie and blue blankey (aka 'manny'), Henry's chicken and wabbit. Minutes before bedtime I can hear George in the utility room watching manny go round and round. "Oh! Manny, manny, manny... awwwwwww. There's chicken... Ooooh! Manny! manny!....Awwwww. There's rabbit. Ooooh! Manny! Manny! Mann... awwwww...."

Here are a few shots from a day at Plantasia, Warwickshire. 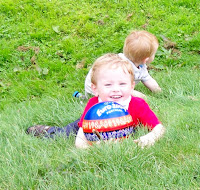 Henry is talking a lot and making his wishes quite well known. George oscillates between being the caring and jealous older brother. Both of them love berries and running around outside.
Posted by tempdisplaced at 12:54