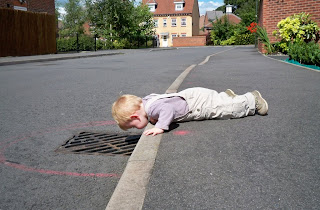 George has been learning(?) about fiscal responsibility. He helps me fold the laundry and hang nappies to dry, and in return he gets enough pence to buy 'chewies' (gummy bears) at the corner shop. (It's only happened twice, and he hasn't really seemed to get the idea that real money is different from pretend money, but we persevere.)
So George and his brother and I were walking to the corner shop to get chewies, and he was reminded to keep the money safe several times so as not to lose it. The boys were playing with stones and sticks, as they do, and stopped to drop things into the street drains. They like the plops. Plop... plop... plop... - plink! And the coin was gone, and tears in its place. So we walked the long two blocks back home, empty handed.
What do you do?
Fortunately, it was laundry day again (yup, lots of laundry in this household!) and I found some socks that needed sorting. So he earned some more money, carefully put it in his pocket (rather than clutching it), and got his chewies. The real test will be what happens next time...?
In other news, Henry has now been graduated to counting discipline and the naughty step. He is 21 months old, and knows he shouldn't pour his milk onto his plate so, there it is. Hope he figures it out soon. He is also mad on anything with buttons, and loves to push them on the CD player to "Nance!" :)
Posted by tempdisplaced at 13:14